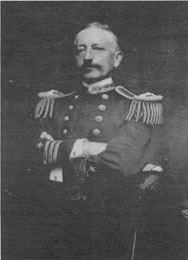 Since much of history is measured by the history of wars, it seems appropriate to tell the story of Wayne County's military history. It continues with the War of 1812.

The American Revolution brought political independence to the United States. It took another war to gain recognition for the young country as an equal partner with Great Britain in world commerce. Following the Revolution, the British tried to place as many restrictions on American shipping on the Atlantic and on the Great Lakes as they had in colonial days. The powerful royal navy enforced these rules, placing a blockade against American vessels and impounding American ships and their crews that broke the rules. After many such incidents and numerous diplomatic protests, it became apparent that the small United States Navy would have to defend America's right as a sovereign nation if she wanted to trade where and with whom she pleased.

And so on June 19, 1812, the United States declared war on Britain. In two years of fighting, the United States Navy succeeded in doing what before then had seemed impossible. It wrested control of the American shipping lanes from the powerful hands of the British by fighting the Royal Navy to a standoff. It was during those two years that Wayne County suffered physically from the ravages of war. Twice during the War of 1812, Wayne County was attacked by the British.

When war was declared, it was almost certain that Western New York would be affected. As early as 1808, with only hints of war on the horizon, a militia group was formed in Lyons, and by 1809, these volunteer companies had been formed into one Brigade. Wayne County had long prepared for war with Great Britain because Sodus and Pultneyville, which kept government stores, felt the ominous presence of the British fleet. When war was declared, their fears were realized.

When no enemy appeared, most of the force was dismissed from Sodus Point. Only a guard remained to watch the military stores, which were placed in the village. The same day, the British vessels came in sight, and in the afternoon, it became evident that an attack upon the village was about to occur. Men on horseback were dispatched to call back, if possible, the companies which were returning, and rally the citizens generally. To Sodus and along the ridge they shouted, "Turn Out! Turn Out! The British are landing".

Some of the militia did return, but many of those who responded were ordinary citizens, with no pretense of military training. About sixty men reached Sodus Point that night to battle the British. The British made their first advance upon the village the same night. The lanterns the British carried and the noise they made alerted the Americans to their advance. Upon their advance, Amasa Johnson, an American, shot down one of the lanterns and instantly the British command rang out "Fire".

Two Americans, Asher Warner and Charles Terry, were mortally wounded and several others were struck. There was benefit in the firing by the British, however, in that the flash of the British guns had revealed their position with considerable distinctiveness. The Americans, with well-directed aim, poured a deadly volley of shots into the enemy's ranks. Several of the British were either killed or severely wounded.

In the darkness, both parties retreated for good reason. The British could have no idea of the force in their front, and in the darkness of midnight, it would have been the height of folly to advance. They hastily took to their boats. The Americans knew their own weakness and had very good proof that a force much superior to them in numbers and discipline had landed. The Americans scattered, some to the woods, others to their homes.

The next morning, the British again landed, meeting with little resistance. They seized the stores in the warehouse and then set fire to all buildings but one in which a wounded militiaman, Asher Warner, lay dying. The Battle of Sodus Point was not to be the last Wayne County was to experience. The British continued their policy of patrolling along the lake and on May 15, 1814, the British fleet attacked Pultneyville. News of the approach of the British fleet had prompted a small militia force to be sent to Pultneyville for the defense of the place in the early part of May in 1814. Additional men arrived one day prior to the attack by the British upon Pultneyville.

The next morning, a thick fog covered the lake and the land. The militia was parading in the village when the fog lifted and disclosed the British fleet anchored in front of the village. The Americans might have been cut to pieces from the British guns, but the fleet had been in the fog, as well as the village, and the surprise was doubtless mutual. The militia, upon seeing the fleet, took to the woods. The sequence of events is not very clear, but negotiations did take place.

Agreement was reached that the flour to be found in Pultneyville was to be handed over to the British. Local reports indicated the British, in taking the flour, soon exceeded the limits assigned to them in the agreement. It is also said they forced themselves upon different areas of the settlement and damaged various supplies. Believing such to be violations of the agreement, the Americans fired upon the British. Shots were fired by both sides, and soon thereafter, the British sailed off into the distance. They took with them two prisoners - Richard White and Prescott Fairbanks. It was several months before the prisoners were released and returned home. Thus ended the second British military engagement into Wayne County.

Only during the War of 1812 were residents of Wayne County directly affected by the ravages of war. The men who served in the War of 1812 did so in a brave way in protection of their families and their communities.

For forty-six years after the proclamation of peach that ended the War of 1812, Wayne County had no occasion to be aroused by the scenes for the sound of War. The Mexican War had been fought in the 1840s, but only a few persons actually residing in Wayne County at the time were engaged in that conflict. The Patriots War in Canada in 1838, and the involvement of Americans on behalf of those in revolt against Britain, created for a time apprehensions of war with England, but this never materialized.

War came, however, in 1861 when the nation divided itself on the issue of States' Rights and whether there should be or should not be slavery within the United States. This division came when several southern states seceded from the Union. Holding that no state had any right to secede on its own; President Lincoln considered all such acts of secession to be acts of treason. He said, as a result, "I therefore consider that in the view of the Constitution and the laws, the Union is unbroken and to the extend of my ability I shall take care as the Constitution itself expressly enjoins upon me that the laws of the Union be faithfully executed in all the states."

Such was the call to arms that ended long years of peach for Wayne County. The response of Wayne County's residents was prompt and patriotic. Sermons were given, editorials were written, and meetings were held in which the call to military service was clearly enunciated. The response to such callings was overwhelming. Military units were formed, and by the middle of the summer of 1861, six hundred men had left Wayne County to join the Union forces. More were to follow. For four years, the residents of Wayne County and the nation were locked in a battle which took a terrible toll, especially on young men of both the North and South.

On the home front, aid societies were formed. For the fighting men, the societies raised money, made clothing, sewed, knit, put up fruit, and packed boxes of supplies. Because of their efforts, the war was made a bit more bearable for those who found themselves in the midst of the battle Because of the women's efforts at home, the men of Wayne County were able to carry on in battle.

As a result of the efforts of the residents of Wayne County, and similar other residents of other counties, cities and towns, the Civil War was won in 1865 in the name of the Union. Wayne County residents had contributed to the victory that made the United States once again united.

This was very short in duration, lasting only form 1898 to 1899, and compared to the Civil War, very few Wayne County residents took part. However, two Wayne County residents did become national heroes in the war. They were Admiral William Thomas Sampson and Admiral Willard Herbert Brownson. William T. Sampson was born in Palmyra in 1840 and received an appointment to the Naval Academy at Annapolis in 1857. When the Civil War broke out in 1861, he had just graduated. During the War, Sampson was responsible for clearing Charleston Harbor of mines and torpedoes, a most dangerous assignment.

During the next thirty years, Sampson held many positions in the Navy as he rose through the ranks, including the Superintendent of the Naval Academy. At the outbreak of the war with Spain in 1898, President McKinley put Admiral Sampson in command of the North Atlantic Squadron with orders to blockade Cuba and Puerto Rico. While carrying out the blockade, ships under his command engaged the Spanish feet in battle in Santiago Bay, which ended in a victory for the Americans. This destruction of the Spanish fleet was a major turning point in the war and brought Sampson to national attention for his leadership.

Also at the Battle of Santiago Bay was another Wayne County man - Commander Willard Herbert Brownson. In command of the cruiser, Yankee, he joined in the blockade of Cuba and bombardment of Santiago Bay. In recognition for this service, Brownson was awarded the Spanish Campaign and the Sampson medals. Willard H. Brownson was born in Lyons in 1845. In early 1860, he left his hometown for the Naval Academy and a career in the Navy, which would span 47 years. Brownson served four tours of duty at the Naval Academy - as instructor, assistant to the commander, commandant of cadets and finally as Superintendent from 1902-1905. In 1905, Brownson was promoted to the rank of Rear Admiral and became Commander-in-Chief of the Asiatic Fleet. He returned in 1907 and lived in Washington D.C. until his death in 1935.

Wars of the Twentieth Century

Men and women from Wayne County have been called to serve their nation in several wars in the Twentieth Century. The Great War, or as it later became know, World War I, was followed by World War II, the Korean Conflict, the Vietnam War, Operation Desert Storm and, most recently, Operation Iraqui Freedom. All have taken their toll on the families in Wayne County.

World War II was brought closer to home when Prisoner of War Camps were set up in Wayne County. By 1945, there were 666 POW camps in the United States, with four located in Wayne County in Marion, Newark, Sodus Point and Clyde.